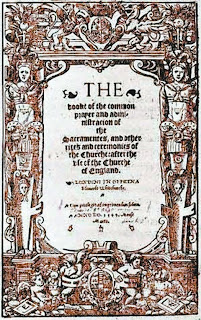 Lest we forget our august Anglican patrimony, our life story.

A few excerpts (emphasis added and in italics):

A meditation on the global impact of Anglicanism, including the US, where its influences were once strong, but are now diminishing.  Yet, the southern hemisphere continues to show these influences, notwithstanding the diminished influences in the West.

"Wherever Englishmen have gone...tens of millions in England and her colonies; each of these copies is a teacher, and many of them are missionaries; and the book has a strong influence for good on the character of every one who uses it. As it is with many other excellent things which we have and use, so it is with the Prayer Book: for the very reason that we use it and get good from it all the time..."

"So, even in the British Isles, the Gospel was largely preached in Latin, and the Bible was read or recited from versions made into that language. In course of time there was an Anglo-Saxon language, into which some parts of the Bible were put in verse or prose; and then, after the Norman Conquest, our modern English grew to be a real language, and Wycklif and others translated the Bible into it, though they did not, as we should say, publish their translations. But by this time Latin had come to be looked upon as a kind of sacred language, and its use had grown into a custom for religious purposes..."

"The services for the seven hours of the day, which were said only by the priests and monks, who knew Latin, became very complicated and hard to follow, while the amount of Scripture that was read in them became very small, and many stories were introduced which were not edifying or not true; while the most sacred service of the Holy Communion, at which the people were expected to attend, had become for many of them only a ceremony, and was surrounded by superstitions. What was needed in the case of the Bible was simply to translate it and give it to the people in English; but in the case of the services, in order that there might be a Book of Common Prayer, it was necessary not only to put them into English, but also to make them more simple and more true. And this making them more simple and more true could be done..."

Cranmer refused to toss centuries of thought, piety, depth, order, decorum, dignity, biblicality, catholicity, and significance.  Cranmer was not an enthusiast, bent upon re-inventing the wheel, like the enthusiasts in America.

"Archbishop Cranmer, and others who worked with him, knew the importance of all this; they were familiar with the old forms, and they knew how to make them of use for the English Church of their own day; and the Archbishop, besides, had remarkable skill in understanding the meaning of the Latin collects and other prayers and putting it into English words and phrases. The result was that there was almost nothing new in the Prayer Book of 1549. It had the old versicles and canticles and creeds and prayers, the old collects (most of them then already about a thousand years old) with their Epistles and Gospels; it had the Psalms so arranged as to be read through once a month; it had tables of daily lessons from the Bible, much longer than had been read for a great while, because the people were hungry, as was said, for the Word of God. And those things were corrected which had been wrong; new things which told of error were left out, and old things which were needed to express the truth were brought back."

Of note, the 1559 BCP was used until the 1662.  Even during the Great Rebellion of the Non-conformists, the 1559--a book for all Protestants--the Book was used.  The 1559 was used in English Cathedrals and parish churches.

"THE Prayer Book has been constantly used in the English Church for all the years since 1549. Twice its use has been forbidden by law: during the reign of Queen Mary, from 1553 to 1558, when cruel means were used against all attempts to reform the Church; and again at the end of the reign of Charles I. and during the Commonwealth, from 1645 to 1660..."

"Based upon services which had behind them fifteen hundred years of Christian thought, translated into deep and rich English with rare taste and delicacy, strengthened by the best products of contemporary learning, and brought into close dependence upon the authority of Holy Scripture, the Book of Common Prayer has slowly but surely won its way into the hearts and minds of Englishmen. It has become their manual of private devotion as well as their book of public worship. The religious and moral life of England for three centuries [and a half] has rested upon the Bible and the Prayer Book, and the national charafter would not be what it is, had either of them been banished from her history."

Imagine this, a return of Archbishop Cranmer, Queen Elizabeth, or Sir Walter Raleigh.  Or, the millions converted, nourished and raised on the BCP through decades.  Imagine Archbishop Cranmer in a modern American Pentecostalist hothouse.

"If Archbishop Cranmer, or Queen Elizabeth, or Sir Walter Raleigh were to come to-day into any English cathedral or parish church, or into any of our churches in the United States, the service would at once be recognized as the same in which the worshipper had often taken part years ago, the only difficulty being in the changes of pronunciation which the lapse of time has brought into the language."

Posted by Reformation at 2:37 PM

Email ThisBlogThis!Share to TwitterShare to FacebookShare to Pinterest
Labels: 1662 Book of Common Prayer