Posted by Reformation at 5:43 PM No comments:


Paul Crouch, who along with his wife Jan, founded a TV network that went on to become the largest Christian television network in the world, died on Saturday, the network announced.

Trinity Broadcasting Network said it is believed that he died from on-going heart problems. He was 79.

YouTube
If Crouch's name doesn't ring bell, his image surely will. You may have caught him hosting the two-hour variety show Praise the Lord, along with his wife, who is known for her big, pink hair and dramatic makeup.

Quoting a book chronicling the network, The Los Angeles Times reports that by the mid-1980s, TBN was "the country's most-watched religious network."

The Orange County Weekly paints a mixed picture of Crouch. In its obit, the weekly calls him both a "titan of American Christianity" and a man who spent the hard earned money of his working-class viewers with little regard.

Crouch also became a pioneer in what's called the "prosperity gospel," which essentially holds that God wants his followers to be rich.

During the past couple of years, Crouch's family has been haunted by sensational scandals about their wealth.

The New York Times ran a long piece about it in which they chronicle the couple's two sets of luxury homes, the secrecy surrounding the millions they received in donations (they received $93 million in 2010) and the family's struggle to keep control of the empire.

As part of the story, the Times interviewed Crouch's grandaughter, Brittany Koper, who was fired for allegedly stealing $1.3 million, but who also opened up about what she said were the company's financial improprieties. The Times reported:

"In two pending lawsuits and in her first public interview, Ms. Koper described company-paid luxuries that she said appeared to violate the Internal Revenue Service's ban on 'excess compensation' by nonprofit organizations as well as possibly state and federal laws on false bookkeeping and self-dealing.
"The lavish perquisites, corroborated by two other former TBN employees, include additional, often-vacant homes in Texas and on the former Conway Twitty estate in Tennessee, corporate jets valued at $8 million and $49 million each and thousand-dollar dinners with fine wines, paid with tax-exempt money.
"In the lawsuits and interviews, Ms. Koper, 26, also charges that TBN has spent millions of dollars in sweetheart deals with a commercial film company owned until recently by a son of the Crouches, Matthew, including poorly monitored investments made after he joined the TBN board in 2007.
"'My job as finance director was to find ways to label extravagant personal spending as ministry expenses,' Ms. Koper said. This is one way, she said, the company avoids probing questions from the I.R.S. She said that the absence of outsiders on TBN's governing board — currently consisting of Paul, Janice and Matthew Crouch — had led to a serious lack of accountability for spending."

On his website, Crouch is described as an "amazing servant of God."

His official biography says that, today, Crouch's network reaches every major continent and over 18,000 TV and cable affiliates around the world. The cable company even has a service in Spanish, Arabic and Farsi, as well as a cable channel in Asia, Europe and Russia.

His bio goes on:

"Dr. Crouch and TBN have been the recipients of numerous awards and citations of appreciation by both local and national leaders including the Golden Angel award from the Excellence in Media organization and the Parents Television Council Entertainment Seal of Approval, given to both the TBN and Smile of a Child networks for producing and promoting positive, pro-family programming. Dr. Crouch was also appointed by President Ronald Reagan to the Private Sector Initiative Project."

Posted by Reformation at 5:35 PM No comments:

Paul Crouch, a pioneering televangelist who founded Trinity Broadcasting Network, the world’s largest Christian TV network, died today, according to the network's website. He was 79.

The church reported in October that Crouch fell ill and was taken to a Dallas-area hospital in October while on a visit to a TBN facility in Colleyville, Texas. He had "heart and related health issues," the church said, and was later returned to California for continued treatment.

The son of a Missouri missionary, Crouch moved to California in the early 1960s to manage the movie and television unit of the Assemblies of God. A decade later, after receiving what he believed was a message from God, he began to buy television stations, cable channels and satellites and developed enough Christian programming to sustain a 24-hour network.

By the mid-1980s, Orange County-based TBN was “the country’s most-watched religious network,” according to J. Gordon Melton and Jon R. Stone in their book “Prime-Time Religion: An Encyclopedia of Religious Broadcasting.”

With his bubbly wife Jan, Crouch anchored TBN’s flagship program, “Praise the Lord,” a nightly two-hour talk show featuring guests, Scripture and entertainment. He was known for preaching a gospel of prosperity, imploring viewers to open their pocketbooks to further God’s works and reap spiritual and material blessings in return.

During four decades on air he often generated controversy, in particular because of the extravagant lifestyle he and his wife led. Critics complained that his jets, mansions and lavish expense-account meals were paid by tax-exempt donations from TBN’s legion of “prayer partners,” whose pledges enabled the network to surpass its rivals in size and global reach.

http://www.latimes.com/obituaries/la-televangelist-paul-crouch-who-founded-the-world-famous-trinity-broadcasting-network-dies-at-79-20131130,0,5660860.story#ixzz2mA7Ycx7v
Posted by Reformation at 3:50 PM No comments:


TBN Founder Paul Crouch Now Breathing on His Own After Oct. 22 Heart Scare Led to Hospitalization

TBN: Former Employees Refuse to Settle Out of Court; They Want 'Hush Money'

"Today, my grandfather, #PaulCrouchSr went home to be with Jesus in heaven. Thank you for your prayers…" Brandon Crouch tweeted.

TBN's official Facebook page later released the announcement about Crouch's death: "Dr Paul F Crouch passed into the presence of the Lord on November 30, 2013. We are grateful for the life of this amazing servant of God. Please pray for the Crouch family during this time. #paulcrouch #tbn"

Crouch was born March 30, 1934 in St. Joseph, Mo., and is the son of Assemblies of God missionaries. His father died when he was seven-years-old, and he was raised by his mother and grandparents. He has a degree in theology from Central Bible Institute and Seminary in Springfield, Mo., and an honorary Doctor of Laws degree from Oral Roberts University in Tulsa, Okla., among other honorary doctorates.

He met his wife, Janice Bethany Crouch, in 1957 and they married in Missouri. They have two sons: Paul Crouch Jr. and Matthew Crouch.

Crouch Sr., co-founder along with his wife, Jan, of the world's largest Christian-owned cable station, had been treated for chronic heart problems for over a decade and had received a pacemaker in 2012, TBN revealed earlier this year.

Crouch was hospitalized on Oct. 22 in Dallas, Texas, and returned home to California in early November. On Nov. 5, TBN released a statement by TBN attorney and spokesman Colby May that said doctors had taken Crouch off the ventilator and he was breathing on his own.

Two years earlier in September 2011, Crouch was also hospitalized for congestive heart failure. It was during this time that Crouch allegedly wrote a letter identifying that he wanted his son Matthew Crouch to take over the position of president of TBN. Then Paul Crouch Jr., who was presumed the heir of TBN, suddenly announced in October 2011 that he would leave TBN to pursue other ministry opportunities.

In recent years, the Crouch and TBN have been embroiled in family lawsuits, with their granddaughter Brittany Koper, former director of finance and human resources, filing a lawsuit saying that the family was distributing more than $50 million for luxury goods, such as jets, estates, and vehicles, to company directors. When Koper refused to keep quiet about the illegal money use, she was fired and allegedly threatened with physical and lethal violence. Her uncle, Joseph McVeigh, who never worked for TBN, filed another lawsuit against TBN at the Orange County Superior Court in early 2012, saying that TBN was maliciously targeting him as part of a "campaign of retaliation" against Koper.

With TBN officially announcing Crouch Sr.'s death on its Facebook page, within less than 20 minutes of the posting there were more than 450 comments, pledging to pray for the Crouch family and offering condolences.

"My prayers are with Jan and everyone in the family. So sad b/c I thought he was doing better. Now he is doing MUCH better. He opened his eyes to see Jesus! WOW!" posted someone identified as Kathy Boulter.

While someone identified as Apostle Doreen Thornton wrote, "Dr. Paul Crouch is loved and will be missed, he was an amazing obedient servant that gave God all that he had, and I am sure great is his reward. God bless the Crouch family you are in my prayers."

And a Jefferson Elicerio Viloria posted, "I really admired this guy..he had his critics, though, although not perfect, and who is, i regard him as a true man of God. I will miss him because i always enjoyed his enthusiasm on TV....God bless the Crouch family."
Posted by Reformation at 3:17 PM No comments:


Word is spreading around Christendom that Paul Crouch, the Missouri native who moved to Southern California with his wife Jan to create Trinity Broadcasting Network, the largest Christian television network in the world, has passed away at age 79. He had been hospitalized recently for heart problems.
The news was announced by his grandson, Brandon Crouch, on Twitter.

Today, my grandfather, #PaulCrouchSr went home to be with Jesus in heaven. Thank you for your prayers... http://t.co/g7NZCYvGX4
— Brandon Crouch (@brandoncrouch) November 30, 2013

Southern Californians knew Crouch and his big-haired wife for decades for their histrionics on Channel 40 (or was it 44? Or 46?) and their continued demand for viewers to give them money in what's known as the prosperity gospel, the idea that God will give money to those who give money. And Orange Countians will forever know TBN for their garish headquarters just across South Coast Plaza (the one that had "Happy Birthday Jesus!" in lights 365 days a year forever), a marriage of God and Mammon no Hollywood screenwriter could ever imagine. It's this garishness that made it easy for the public to dismiss Crouch's influence, but he will go down in the history of Christianity as someone as crucial to spreading the Gospel worldwide as fellow OCer Charles E. Fuller--for Fuller, of course, it was radio, while Crouch found his success with TV.

Of course, like his fellow recently deceased OC Christianity titan Chuck Smith, Crouch was also an ass of a man.

Dr Paul F Crouch passed into the presence of the Lord on November 30, 2013. We are grateful for the life of this amazing servant of God. Please pray for the Crouch family during this time. ‪#‎paulcrouch‬ ‪#‎tbn
‬

While Crouch tried to pass himself off as a kindly old grandfather, his profligate spending over the decades while constantly exhorting viewers--overwhelmingly working-class--to give more and more money (we can't emphasize this enough, just like him) was downright disgusting, and TBN's defense of on-air personality Steve Galiher, who got a wrist slap for driving while drunk on his way to TBN headquarters (in the process crashing into a Vietnam War vet who never recovered from his injuries) was simply vile. And who can forget the scandal unearthed by former Los Angeles Times reporter William Lobdell that essentially outed Crouch as a closet homosexual, a scandal so buried in OC court records as to essentially be unethical?


Crouch spent the last years of his life fighting off a lawsuit from his granddaughters alleging that TBN had become an incestuous, corrupt den of thieves. It's going to be one hell of a funeral, no?

Posted by Reformation at 2:29 PM No comments: 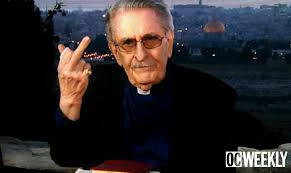 TBN has posted an announcement to its Facebook page.

This blog post will be updated as more information becomes available.