Posted by Reformation at 9:21 PM No comments:

http://www.protestantassociation.com/elizabethonimages.htm
QUEEN ELIZABETH I’S OPINION OF SACRED PICTURES.
(From Strype's Annals, quoted in the Quarterly Review.)
The Dean (Dean Nowell) having gotten from a foreigner several fine cuts and pictures, representing the stories and passions of the saints and martyrs, had placed them against the epistles and gospels of their festivals in the Common Prayer Book. And this book he had caused to be richly bound, and laid on the cushion for the Queen's use, in the place where she commonly sat, intending it for a new year's gift to her majesty, and thinking to have pleased her fancy therewith; but it had not that effect, but the contrary: for she considered how this varied from her late open injunctions and proclamations against the superstitious use of images in churches, and for the taking away all such reliques of Popery. When she came to her place she opened the book and perused it, and saw the pictures; but frowned and blushed; and then shut it (of which several took notice), and calling the verger, bad him bring her the old book, wherein she was formerly wont to read. After sermon, whereas she was wont to get immediately on horseback, or into her chariot, she went straight to the vestry, and applying herself to the dean, thus she spoke to him: —
Queen. — Mr. Dean, how came it to pass that a new service book was placed on my cushion? To which the dean answered:
Dean — May it please your majesty, I caused it to be placed there. Then said the queen:
Q. — Wherefore did you so?
D. — To present your Majesty with a new year's gift.
Q. — You could never present me with a worse.
D. — Why so, madam?
Q. — You know I have an aversion to idolatry; to images and pictures of this kind.
D. — Wherein is the idolatry, may it please your majesty?
Q. — In the cuts resembling angels and saints; nay, grosser absurdities, pictures resembling the Blessed Trinity.
D. — I meant no harm; nor did I think it would offend your majesty, when I intended it for a new year's gift.
Q. — You needs must be ignorant then. Have you forgot our proclamation against images, pictures, and Romish reliques in the churches? Was it not read in your deanery?
D. — It was read. But, be your majesty assured, I meant no harm when I caused the cuts to be bound with the service book.
Q. — You must needs be very ignorant to do this after our prohibition of them.
D. — It being my ignorance, your majesty may the better pardon me.
Q. — I am sorry for it, yet glad to hear it was your ignorance, rather than your opinion.
D. — Be your majesty assured it was my ignorance.
Q. — If so, Mr. Dean, God grant you his Spirit, and more wisdom for the future.
D. — Amen, I pray God.
Q. — I pray, Mr. Dean, how came you by these pictures? Who engraved them?
D. — I know not who engraved them. I bought them.
Q. — From whom bought you them?
D. — From a German.
Q. — It is well it was from a stranger. Had it been any of our subjects, we should have questioned the matter. Pray let no more of these mistakes, or of this kind, be committed within churches of our realm for the future.
D. — There shall not.
Reproduced from the Protestant Association’s Protestant Magazine, Vol. II, November 1, 1840.
Posted by Reformation at 8:58 PM No comments: 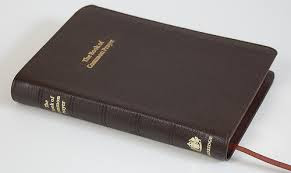 
The Protestantism of the Prayer Book (Dyson Hague, 1890)


The Works of the English Reformers: William Tyndale and John Frith, Volume I (Thomas Russell, 1831)


An Apology, or Answer in Defence of the Church of England (John Jewel, 1719)


Of the Laws of Ecclesiastical Polity, Books I-IV (Richard Hooker, 1888)


Of the Laws of Ecclesiastical Polity, Book V  (Richard Hooker, 1902)


Commentaries on the Confession and General Theology:


The Catholic Doctrine of the Church of England: An Exposition of the Thirty-nine Articles (Thomas Rogers, 1854)


An Exposition of the Thirty-nine Articles of the Church of England (William Beveridge, 1830)


The Episcopal Manual: A Summary Explanation of the Doctrine, Discipline, and Worship of the Protestant Episcopal Church in the United States of America, with an Appendix (William H. Wilmer, 1841)


A Catechism on the Thirty-nine Articles of Religion of the Church of England (James Beaven, 1853)


The Heidelberg Catechism of the Reformed Christian Religion (A. S. Thelwall, 1850)


The Remains of Thomas Cranmer, Volume I (Henry Jenkyns, 1833)


Expository Thoughts on the Gospel of Matthew (1860)


Expository Thoughts on the Gospel of Mark (1879)


7. The Decades of Henry Bullinger: The First and Second Decades, Vol. 1 (Heinrich Bullinger, 1849)


12. An Answer in Defense of the Truth Against the Apology of Private Mass (Thomas Cooper, 1850)


17. A Defence of the Sincere and True Translations of the Holy Scriptures Into the English Tongue: Against the Cavils of Gregory Martin (William Fulke, 1843)


19. The Remains of Edmund Grindal: Successively Bishop of London and Archbishop of York and Canterbury (Edmund Grindal, 1843)


21. Later Writings of Bishop Hooper: Together with His Letters and Other Pieces (John Hooper, 1852)


30. Liturgical Services: Liturgies and Occasional Forms of Prayer Set Forth in the Reign of Queen Elizabeth (1847)


31. A Progress of Piety: Whose Jesses Lead Into the Harbour of Heavenly Heart’s Ease (John Norden, 1847)


34. The Examinations and Writings of John Philpot (John Philpot, 1842)


40. The Catholic Doctrine of the Church of England: An Exposition of the Thirty-nine Articles (Thomas Rogers, 1854)


41. The Sermons of Edwin Sandys: To which are Added Some Miscellaneous Pieces (Edwin Sandys, 1842)


42. Doctrinal Treatises and Introductions to Different Portions of the Holy Scriptures (William Tyndale, 1848)


43. Expositions and Notes on Sundry Portions of the Holy Scriptures: Together with The Practice of Prelates (William Tyndale, 1849)


44. An Answer to Sir Thomas More’s Dialogue: The Supper of the Lord After the True Meaning of John VI. and 1 Cor. XI. And Wm. Tracy’s Testament Expounded (William Tyndale, 1850)


45. A Disputation on Holy Scripture: Against the Papists, Especially Bellarmine and Stapleton (William Whitaker, 1849)


50. The Zurich Letters: Comprising the Correspondence of Several English Bishops and Others, with Some of the Helvetian Reformers, During the Early Part of the Reign of Queen Elizabeth, Vol. 1 (1842)


51. The Zurich Letters: Comprising the Correspondence of Several English Bishops and Others, with Some of the Helvetian Reformers, During the Early Part of the Reign of Queen Elizabeth, Vol. 2 (1845)


52. Original Letters Relative to the English Reformation: Written During the Reigns of King Henry VIII., King Edward VI., and Queen Mary: Chiefly from the Achives of Zurich, Vol. 1 (1846)


53. Original Letters Relative to the English Reformation: Written During the Reigns of King Henry VIII., King Edward VI., and Queen Mary: Chiefly from the Achives of Zurich, Vol. 2 (1847)


Some of these works are also elsewhere on this list.


Publications of the Protestant Association (1839)


On the Objects and Uses of Protestant Associations (1840)


A History of the Evangelical Party in the Church of England (G. R. Balleine, 1911)


General Anti-Protestantism and its Refutation:


The Commission on Ritualism, First Report (1867)


The Commission on Ritualism, Second Report (1867)


The Commission on Ecclesiastical Discipline, Report (1906)


Oxford Divinity compared with that of the Romish and Anglican Churches: With a Special View to the Doctrine of Justification by Faith (Charles Petitt McIlvaine, 1841)


The Church of England in Canada Should be Protestant until Rome Dies (S. H. Blake, 1910)


Observations upon the Prophecies of Daniel and the Apocalypse of St. John (Isaac Newton)


Griffin, Eric Richard. Daniel Brevint and the Eucharistic Calvinism of the Caroline Church of England, 1603-1674 (Toronto: University of Toronto, 2000).


Bray, Gerald, The Faith We Confess: An Exposition of the Thirty-Nine Articles (London : Latimer Trust, 2009)


Hylson-Smith, Kenneth, The Churches in England  from Elizabeth I to Elizabeth II (London: SCM Press, 1996-1998)


McGillion, Chris, The Chosen Ones: The Politics of Salvation in the Anglican Church (Crows Nest, N.S.W.: Allen & Unwin, 2005)


Packer, J.I., A Quest for Godliness: The Puritan Vision of the Christian Life (Wheaton: Crossway Books, 1990)


Packer, J.I. and R.T. Beckwith,  The Thirty-Nine Articles: Their Place and Use Today (Oxford: Latimer House, 1984)


Vernon, Charles William, The Old Church in the New Dominion: The Story of the Anglican Church in Canada (London: Society for Promoting Christian Knowledge, 1929)


Wohlberg, Steve, End Time Delusions: The Rapture, the Antichrist, Israel, and the End of the World (Shippensburg: Treasure House, 2004)


The opinions and views expressed by various contributors to this internet publication, those found in writings published or republished here, as well as those belonging to the various organizations and publications linked from here, do not necessarily reflect those of this Protestant association or its members.

Posted by Reformation at 8:49 PM No comments: