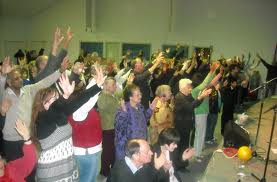 A hat tip to Tim Naab, a longtime practitioner and now-recovered/recovering Pentecostalist.  His family was/is three generations deep into it and had affiliations with some of America's leading backwoodsmen.  Here's Tim's post from Facebook.  If further info needed, a search on Tim Naab here at RA will lead you to his important site of research.  If you think Pentecostalists have been charming, merciful and thoughtful in their history to Confessional and liturgical Churchmen, think again.  They have been and are hubristic ignoramuses...and loud ones at that. Here's Tim below.
---------------------
Since the mid 19th century there has been a mystery illness that has baffled Medical science. It appears now that it is may be associated with the onset of dispensationalism. Another outbreak began in the early 20th century and grew rapidly... until the late 60s when the instances grew at an alarming rate. Doctors have determined that the outbreak in the early 20th century followed Pentecostalism and the alarming growth rate in the 1960s followed the Charismatic Movement.

The scientific name for this disease, Syncopetarantismutopianpachydermatousidiopathicrdelirium, is constructed from 6 words:

1.) Syncope (Partial or complete loss of consciousness with interruption of awareness of oneself and ones surroundings.)

2.) Tarantism (associated with melancholy, stupor, madness and an uncontrollable desire to dance)

4.) Pachydermatous (to be thick-skinned; insensitive to criticism, insult, etc.)

5.) Idiopathic (Of unknown cause)

The patient with this diagnosis is referred to by its acronym, S.T.U.P.I.D.. At this time there is neither cure nor treatment.
Posted by Reformation at 8:19 PM