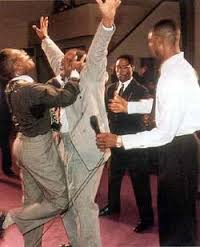 Ever since I was a child, I have often encountered a particular story. It is something of an urban legend in certain church circles.
It goes like this: There was a missionary who met up with a person, usually a tribeman of some sort in a remote jungle area, with whom he wished to share the Gospel. Unfortunately, though, they could not understand each other's languages. Somehow the missionary felt compelled to open his mouth and just speak. To his surprise, he found himself speaking the other person's language fluently, though not aware of what he was saying. The tribesman was miraculously converted.

I have heard a dozen or more incarnations of this story, but those are the central story factors that are always present. As I said earlier, in some church circles, especially Pentecostal ones, this is something of an urban legend. It is always recounted third or fourth hand. I have never spoken with someone who actually claims to have personally had this experience.

The unspoken assumption, and often very clearly spoken assumption, of this story is that egghead cessationists are wrong and the supernatural sign gift of tongues still functions in the church today. Usually, this idea is further 'established' by claiming that while much of the tongues speaking that goes on in many Pentecostal churches is fraudulent, this kind must be real because it occurs in situations that seem to replicate the condition of the 1st Century Church.

This is a problematic assumption. I am not satisfied that this situation replicates the situation of the Apostolic age. I don't think it even comes within a hundred miles of the situation that existed on the Day of Pentecost.

1. On Pentecost, there was, as yet, no New Testament.

2. Tongues did not miraculously preach the Gospel to people in need of an interpreter.
3. The 3,000 converts were converted by Peter's plain preaching of the Gospel in Aramaic, a language they all understood anyway. Peter did not preach in tongues. The witnesses, though fluent in other languages, were all Jews who understood Peter's Aramaic sermon. The elect were converted, the non-elect mocked them, in direct fulfillment of Isaiah 28:11-12.
4. Pentecost was the event wherein the New Testament Church emerged from the cocoon of the Old Testament Church. This can never be repeated.
5. Virtually the entire visible church was present - something that has not been repeated since.
6. Tongues, on the Day of Pentecost, was not a conversation between a believer and an unbeliever. It was not an evangelism tool.
For more, see:
http://andycontramundum.blogspot.com/2010/09/missionary-tongues-story.html
Posted by Reformation at 9:58 PM