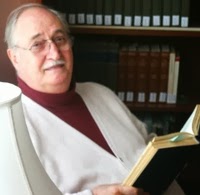 
My friends Dr. Michael A. Milton and Samuel Metzger have just let me know of the passing of the great Systematic Theologian Dr. Robert L. Reymond. I was privileged to study under Dr. Reymond from 1983-1987 at Covenant Theological Seminary in St. Louis, MO. And to know his family. He, and they, have been great blessings in my life. I thank God for him, and for them.
Revelation 14:13 And I heard a voice from heaven saying, “Write this: Blessed are the dead who die in the Lord from now on.” “Blessed indeed,” says the Spirit, “that they may rest from their labors, for their deeds follow them!”
Robert L. Reymond was a Christian theologian of the Protestant Reformed tradition. He is best known for his New Systematic Theology of the Christian Faith(1998). Reymond held B.A., M.A., and Ph.D. degrees from Bob Jones University and did post-doctoral studies at Fuller Seminary, New York University, Union Seminary (New York), Tyndale House, Cambridge, and Rutherford House, Edinburgh.

Find a list of available resources by Dr. Reymond at The Gospel Coalition. Also, check out his Sermon Audio page for .mp3s of his sermons and lectures. Amazon.com has a list of several of his books.
Source

We add the following from an earlier post from last month.

“First, a brief Wiki-bio.  Mr. (Rev. Dr. Prof.) Robert L. Reymond is a Christian theologian of the Protestant Reformed tradition. He is best known for his New Systematic Theology of the Christian Faith (1998). Reymond holds B.A., M.A., and Ph.D. degrees from Bob Jones University and has taught at Covenant Theological Seminary in St. Louis, Missouri and at Knox Theological Seminary in Fort Lauderdale, Florida. After resigning from Knox in January 2008, he accepted a call as regular pulpit supply of Holy Trinity Presbyterian Church, a new congregation in the Orthodox Presbyterian Church.

“Reymond has written a book on Paul entitled Paul Missionary Theologian (2003) and another about Jesus called Jesus Divine Messiah (2003). Other books include a short biography called John Calvin: His Life and Influence (2004) and Contending for the Faith: Lines in the Sand That Strengthen the Church (2005), The God-Centered Preacher, The Reformation's Conflict with Rome: Why It Must Continue, What is God, and The Lamb of God.”
Second, one reviewer at amazon.com says this:
“Anyone interested in learning about conservative Presbyterian & Reformed (from now on P & R) theology should consult this book. Coming from a Calvinistic Baptist background there are certainly a number of things that I would disagree with in the book. However, Reymond has done a very good job presenting P & R theology in a clear but scholarly fashion. Though many will complain that the book is not balanced and treats some subjects superficially, Reymond's objective was to articulate what the P & R tradition teaches rather than giving us a comprehensive systematic theology (try Erickson's instead). Some P & R people will find that Reymond is too logical rather than biblical and that he relies on Gordon Clark too heavily for his view on revelation, God's nature, the atonement, election, and theodicy. For example, Reymond is unapologetically supralapsarian in his view of the decrees (pp. 488-502) and insists that whatever comes to pass is good because it is willed by God (see section on theodicy on pp. 376-8). Also, his view of Christ's eternality is also controversial departing from the standard Nicene view (a view which I disagree with Reymond). However, you have to give him good marks for trying to defend his particular position. Besides these questionable positions, Reymond does an excellent job defending a very high-view of the inspiration of Scripture (liberal "Christians" perhaps should read up on this section). He also does a good job defending the typical Calvinist understanding of fallen man (that fallen man is totally depraved and unable to save himself). Another aspect of this book I like is the way he presents the orthodox Reformed understanding of the covenants of the Bible. He follows the traditional Westminsterian scheme of a dual covenant of works/covenant of grace structure (covenant of works=meritorious salvation; covenant of grace=salvation by faith in Christ alone). Though I do not agree with this structure, Reymond has given us a good treatment of the topic from a historic Reformed perspective. His section on soteriology is very well done (following the traditional Reformed schema) and his section on ecclesiology is very informative (espousing the Presbyterian and paedobaptist perspective). His section on eschatology could have been better. He writes from an amillennial perspective, but gives lots of Scripture passages to defend his viewpoint (however, many will find his sections on the divergent views of eschatology very informative [pp. 981-6 and 1067-93]). The appendices are also useful--even giving us a brief treatment on the Calvinistic TULIP (pp. 1125-6). Finally, the bibliography section on other systematic theologies is very handy for theology students (pp. 1133-42). One final note before I close. Someone below was disappointed because Reymond didn't really interact with the so-called New Perspective on Paul. Reymond does this in his book on Paul's theology. This book was not a place for Reymond to interact heavily with this growing movement. However, the New Perspective is a new movement that is trying to influence (I should say infiltrate) the P & R tradition. Reymond defends the orthodox Protestant view of justification (pp. 739-56); the New Perspective is trying to destroy the teachings of the past 500 years. Reymond does briefly discuss Daniel Fuller's and E. P. Sanders' views on pp. 431-3 and p. 1116 (footnote), respectively. Reymond does a convincing job telling the readers that the view of justification and law promoted by these two authors (faith+ works = justification) is a departure from Reformed (and Protestant) orthodoxy. Reymond is not trying to put-down "biblical theology" here, but trying to defend the correct view of justification by faith alone (sola fide). Those who have a problem with Reymond on this issue are those people who are trying to legitimize their stay within the Protestant tradition while denying a major tenet of the tradition (perhaps they should find a different home to espouse their works-salvation gospel). Only one perspective is right--both cannot be. This book is a must read for all who are interested in P & R theology.”

Posted by Reformation at 9:08 PM