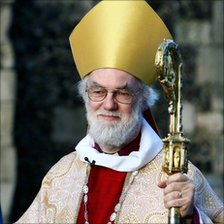 More than half of the people who took part in an opinion poll for the BBC believe the Archbishop of Canterbury, Dr Rowan Williams, has been a good leader of the Church.

But more than a quarter of those polled for BBC Local Radio by the pollsters COMRES think he has not helped keep the Church of England relevant in Britain.

The next Archbishop of Canterbury could be chosen later as the Crown Nominations Commission meets to discuss the candidates.

The commission will put forward its choice for approval by the Prime Minister and then the Queen.

The survey of 2,594 adults in England was carried out by phone from 24 August to 9 September.

The poll found 53% of people agreed that Dr Williams had been a good leader and 55% think he has been clear in telling people what he believes and why.

During Dr Williams's 10 years in the post, the Church has seen major upheavals over issues such as whether to create women bishops. It has also voiced its opposition to the government's gay marriage laws while Dr Williams's comments on issues like Sharia and the wars in Iraq and Afghanistan have often come under attack in the media.

"I'm a great fan," said Anne Waizenaker, the vicar of St Nicolas Church, in Shoreham-by-Sea, in West Sussex, where a group of mostly elderly parishioners have gathered for a traditional, mid-week communion service.

"He's a great theologian, a man of great depth and I think for me he's been a great leader of the Church, I hope history will judge him kindly." 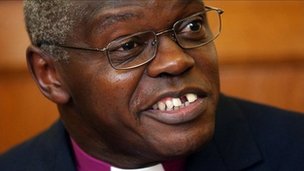 Dr Sentamu is a popular choice with the conservative wing

"He's been a leader in a very difficult situation," said retired priest Father Tom Winter. "The ordination of women, the consecration of women as bishops, the problem of homosexuals being ordained or not ordained. These are issues which he has not fundamentally got to grips with.

"But he stays true to what he believes and he does it in a very gentle, loving way. That for me is true leadership."

Paul Handley, the editor of the Independent Church Times newspaper and a seasoned Rowan watcher, said: "For the last few Archbishops there have been some rows brewing and quite a lot of them have come to a head in his time.

I think in standing back and trying to achieve balance, he's lost any direction or authority over people”


"He hasn't really been able to set an agenda of his own. He's attempted to make more of the pluralism side of our community and got slapped down for an aspect of that.

"But if you talk to religious leaders across the board, they all think of him as somebody who's opened the establishment to different views and different religions."

But a quarter of people told the BBC poll the current Archbishop has not made the Church relevant to modern Britain.

And at the more modern, Evangelical end of the Anglican Church, some people believe he could have done better as leader of the Church.

Even though it is only a short distance from St Nicolas in Shoreham, St Peter's Church, in Brighton, is a lively evangelical Church with a modern style of worship and a growing congregation of more than 600 people.

Worshipper Clive Newton said: "I think in standing back and trying to achieve balance, he's lost any direction or authority over people."

Rohip Nathaniel, also part of the congregation agreed, he said: "I think he's had a very tough time to be honest because he's been trying to please many people all of the time and I think that's been a problem. I would have preferred him to take a solid stance and stick to his guns."

Both men would like to see the Archbishop of York, John Sentamu, who is popular with the conservative and evangelical wing, succeed Dr Williams.

The Reverend George Pitcher, who was the Archbishop's press secretary for a year, said that on the contrary, Rowan Williams has always been clear in the message he has sent out.

He said: "The Archbishop of Canterbury never says anything he doesn't mean, hasn't thought through and doesn't feel that the time is right for saying.

"He never speaks off the cuff. When he's said something which has upset politicians or some quarters of the media, I've never seen him or heard of him regretting it.

"It needed saying in his view and has been said, and it's given people permission to hold that view."

The next Archbishop will not find the job any easier. The Church of England has yet to make its final decision on consecrating women as Bishops and has expressed its opposition to the impending laws introducing gay marriage.

In addition, many parts of the worldwide Anglican Church - especially in parts of Africa - are still unhappy with the leadership from London.
Posted by Reformation at 5:58 PM