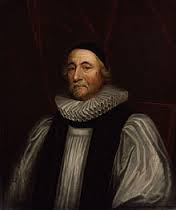 Buried in Westminster Abbey with an Anglican service during, of all things, Cromwell's time and by his permission. A man who believed, as do we, in a modification of episcopacy, that is, a reduction to and governance by a presbytery. Give them a new name too, e.g. "Servant Clerks" of the Presbytery. Given their love of humility and service, they'd love the new name "Servant Clerk of the Presbytery." James Ussher is one of those few men we would call "Bishop," of course, by leave of a good stout presbytery of godly and learned Elders. Ussher, a good Reformed man too.

http://www.westminster-abbey.org/our-history/people/james-ussher
James Ussher
James Ussher (or Usher) was born in Dublin on 4 January 1581, son of Arland (or Arnold) Ussher (died 1598) and Margaret, daughter of James Stanihurst. He had one brother called Ambrose. At age 13 he entered the newly founded Trinity College in Dublin and had a distinguished academic career. He was ordained by his uncle Henry Ussher, Archbishop of Armagh, in 1602. In 1614 he married Phoebe (d.1654), daughter and heiress of Luke Challoner. He became a famous preacher and held the offices of Bishop of Meath, Archbishop of Armagh and Primate of Ireland. During the Irish troubles of 1641 most of his property was destroyed. He later lived in London and Oxford and with his only daughter Elizabeth (wife of Sir Timothy Tyrrell) in Wales. For a short time, while the Dean was imprisoned in the Tower of London, Ussher used the Deanery at Westminster. He attended Charles I at Oxford but later also found favour with Oliver Cromwell.
Burial
It was Cromwell who ordered his burial in the chapel of St Paul in Westminster Abbey and paid the funeral expenses. It is thought that this was the only occasion at which the Anglican funeral service was read in the Abbey during the Commonwealth period. The present Irish marble gravestone, with brass lettering, was not put in until 1904 and the Latin inscription was written by Dr Gwynn (Regius Professor at Trinity College) and others. It can be translated: 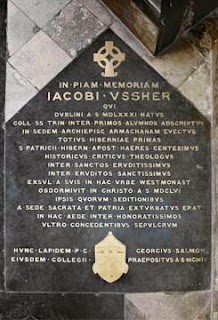 "In pious memory of JAMES USSHER who was born in Dublin in 1581, entered among the first students of Trinity College, promoted to the archiepiscopal see of Armagh, primate of all Ireland, the hundredth heir of St Patrick the apostle of Ireland, historian, critic, theologian, most learned among the holy, most holy among the learned, exiled from his own in this city of Westminster, he fell asleep in Christ in 1656. He was expelled from his sacred see and country by those same seditions which went on to grant him burial in this church among the most honoured. This stone was placed by George Salmon, Provost of the same college, 1904"


His coat of arms appears at the base of the stone, surmounted by a mitre. This shows the arms of the See of Armagh impaling Ussher (azure, a chevron ermine between three batons, or).


A photograph of the stone can be purchased from Westminster Abbey Library.
Further reading:
Oxford Dictionary of National Biography 2004 (entries for James and Ambrose);
James Ussher, Archbishop of Armagh by R. Buick Knox, Cardiff, 1967.
There is a portrait of James in the National Portrait Gallery, London www.npg.org.uk
Posted by Reformation at 8:15 PM