Further observations from the close of Mary's reign to the early months of Elizabeth's accession. Parker (1504-1575), a man at the top of his game as it were, then ruthlessly deprived, and later become Elizabeth's first Reformed and Protestant Archbishop. It's a Joseph or Job story. From patronage to prison, as it were, and a return to privilege and patronage. We bring observations on McClure's work, the our observation about the observations, with a few practical applications. 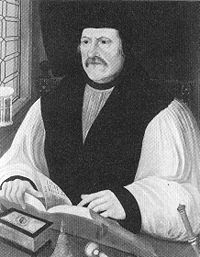 1. Parker’s continued sequestration to private life under Mary's brutal reign, while enjoyed--the retirement, increasingly rendered it difficult for him to desire engagement with and involvement with social situations. There may have been some signs of post traumatic stress syndrome, but this is only a query. PTSD can manifest itself in withdrawal. Also, it can manifest itself in aggressive and hostile behaviours. It is something we believe Luther suffered from.

2. Parker worked on translations of the Psalms for devotional exercises.(99) Our author believes this under-laid and underlined the foundations of Parker’s moral strength.

3. He writes the “Defense of the Marriage of Priests.” He speaks of God’s wrath and banishment of excellent men from England. Parker sees God as judging England with the rise of Romanism during Mary’s time.

4. Parker had extremely strong reactions to Romanism. It was repugnant to him. (100).

5. We turn to the opening months of Elizabeth 1’s reign. Mary had left behind a nation with stagnant trade, a people worn out by factionalism, and numerous dioceses without ordinaries. The war with France had concluded, but relations with Scotland were troubled with Mary Queen of the Scots on the throne.

7. Sir William Cecil, a conformist under Mary, comes to be Elizabeth’s chief councilor. Her inner council is shaped by Protestant and Reformed men.

8. In December 1558, expatriates or exiles from the Marian period, begin returning with their differing "factions:" Strasbourg, Frankfurt and Geneva. McClure, throughout, has been insistent on denigrating those who fled during Mary's reign. He's tipped his hand too often. Methinks thou dost protest too much, McClure.

9. Whittingham’s return was delayed while in Geneva. John Foxe remained at Basel, preparing an edition of the Bible and bringing out his Latin version of the Martyrology. (106).

10. A stir was occurring with the expats. Soon, a Royal proclamation went out forbidding all preaching, but allowing the Gospels, Epistles and the Ten Commandment in English. The Litany of Cranmer’s was allowed but omitted the offensive section, “Good Lord, spare us from the gross and detestable enormities of the bishop of Rome.” (106)

11. 10 above was to continue until “consultation may be hand by Parliament, by Her Majesty and her three estates of the realm for the better conciliation and accord of such causes at present are moved in matters and ceremonies of religion.” (106).

1. Theology in that period was determined by national leaders, kings, queens, electors, etc. The religion of the sovereign was the religion of the people. This was not only so in England, but in other Protestant countries.

2. McClure offers little, thus far, on Parker’s theological outlines, convictions, or beliefs. We are not impressed with his work thus far. We look forward to reading Parker himself--en toto.

3. John Foxe’s Marytrology would be extremely influential in shaping subsequent Anglicanism in a Protestant and Reformational perspective, a fact downplayed in the last 100 years of Anglican “Manglicanizing,” Romanizing and “revisionism.”

4. England, to this day, has never been free of a State-Church. For example, the XXXIX Articles, the 1662 Book of Common Prayer, and its Ordinal still are the “law of the land.” Never mind that it’s not heeded, but the fact still exists. Non-English Anglicans, e.g. Nigeria or Australia, are not state-run, funded or controlled.

We have drawn no pertinent applications from this section except a couple:

1. Persecuted bishops have more credibility than opulent, affluent, corpulent and western bishops. When guns are pointed at your head and you take a stand, you are more credible...in terms of your statements of faith. Akinola, whether one agrees or disagrees with him, at least has faced suffering. That’s not a guarantee of apostolic succession, that is, concurrence with apostolic doctrine. It does suggest that when the persecuted and suffering man says something...the presumption of integrity is far greater. He means what he says and says what he means.

2. Parker's forced 5-year time out is an excellent model for ACNA bishops. An excellent program would be for all the "Primates" in the theological zoo to retire for several years. Time to spend at Wycliffe Hall under Dr. Turnbull. And a few years at Westminster California on basic Reformed theology, something they never had in their ludicrously and notoriously weak backgrounds.
Posted by Reformation at 7:13 PM