LETTER XXV—JOHN CALVIN TO SIR WILLIAM CECIL, SECRETARY TO THE QUEEN OF ENGLAND 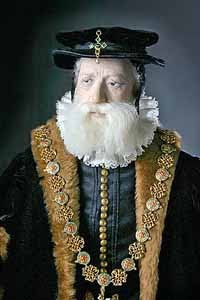 Calvin writes in 1559 to Sir William Cecil, Secretary to Her Majesty, Queen Elizabeth 1. This period follows the persecuting reign of queen Mary who succeeded Edward VI. Mary was enthroned October 1553 and died November 1558. Cecil was first promoted by the duke of Somerset and became a distinguished lawyer; by his moderate and temporizing conduct during Mary's bloody reign, he escaped punishment. He continued in England and, upon the accession of Elizabeth, he was made secretary of state.

LETTER XXV—JOHN CALVIN TO SIR WILLIAM CECIL, SECRETARY TO THE QUEEN OF ENGLAND.

For writing to you familiarly, most accomplished man, I shall not make a long apology, although I am personally unknown to you. Relying on the testimony of some pious persons, who have declared to me your generosity of heart, I trust that you will be disposed to receive my letter with pleasure ; especially when you shall discover from the perusal my intention in writing. Since the awful darkness which had almost stupified the minds of pious men is dispersed, and the clear light has suddenly shone forth beyond all hope, it is reported that you, possessing distinguished favour with her majesty the queen, have endeavoured diligently to remove the profligate superstitions of Popery, which had accumulated through four years in England, so that the sincere doctrines of the gospel, and the pure and entire worship of God, again flourish. I have now therefore to exhort you freely and openly to commence your warfare for Christ. This one thing however remains, that what you do, you should proceed to do with the greatest activity and most invincible constancy. Your holy labours should neither be broken by any troubles, difficulties, contests or terrors, nor even in the least degree retarded. I doubt not, indeed, but that obstacles sometimes encounter you; and that dangers rise full before your eyes, which would dishearten the most resolute, unless God should sustain them by the most wonderful power of his Spirit. This is the cause, for the defence of which it is not lawful for us to decline the most arduous labours. During the time that the public place of execution was appropriated for burning the children of God, you yourself remained silent among others. At least then, since greater liberty is restored by the singular and incredible favour of God, it becomes you to take courage; and if you was, during that period, too timid, you may now compensate that loss by the ardour of your zeal. I know very well that a preposterous haste is injurious; and that many retard their progress by an inconsiderate and precipitate zeal, with which they would leap in a moment to the end of their race. But on the other hand, it is faithfully to be considered, that to maintain the whole truth and pure devotion of the gospel, is the work which God assigns us, and which must not be slothfully undertaken. From the present state of things, you are better able to judge, what steps are proper to be pursued, and what degree of moderation is to be exercised. But yon will remember, that all delay, with however specious colours it may be covered, ought to excite your suspicion. One fear, I conjecture, is from popular tumults, since among the nobles there are many who would kindle up the fire of sedition; and if the English become tumultuous among themselves, their neighbours are at hand, who anxiously watch for whatever opportunity may offer for their purpose. But as her most serene majesty has been wonderfully raised to the throne, by the hand of God, she cannot otherwise prove her gratitude, than by shaking off all delays by her prompt alacrity, and surmounting all impediments by her magnanimity. Since it can hardly be otherwise, but that, in the present turbulent and confused state of things, her attention should be suspended among important affairs, her mind perplexed and sometimes wavering; I have ventured to exhort her, that, having entered the right course, she should persevere with constancy. Whether I have done this prudently or not, let others judge. If, by your endeavours, my admonition produces the desired effect, I shall not repent of having given her that counsel. Consider also, most illustrious sir, that God has placed you in that degree of favour and dignity which you hold, that you might be wholly attentive to this concern, and stretch every nerve to the accomplishment of this work. And lest slothfulness by any means creep upon you, let it now and then come into your mind of what great moment are these two things: First, in what manner that religion, which was miserably fallen away ; that doctrine of salvation, which was adulterated by abominable falsehoods; that worship of God, which was polluted with defilements, may recover their lustre, and the Church be cleansed from this abomination? Secondly, how the children of God among you may be free to invoke his name in sincerity; and how those who are dispersed may be again collected ? Farewell, most excellent man, sincerely respected by me. May the Lord guide you by his Spirit, protect and enrich you with all good gifts.