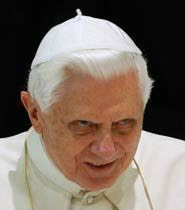 Standard Papist hubris, dis-seating Confessional Churchmen. Nothing new. Jean Cauvin forever put the military boot to Rome's exposed neck in Book IV, Institutes of the Christian Religion. Of course, Bishop Gregory the Great (Rome, c. 600) stated that if any Bishop claimed "universal supremacy," such a one was "an anti-Christ." ECT-dialogicians from the evangelical world need to get the real sense of it. This much, Joseph Ratzinger knows where the line in the sand (=cement with barricade) is drawn.
CBC News - World - Catholic Church only true church, Vatican says

The Vatican issued a document Tuesday restating its belief that the Catholic Church is the only true church of Jesus Christ.

The 16-page document was prepared by the Congregation for the Doctrine of the Faith, a doctrinal watchdog that Pope Benedict used to head.

Formulated as five questions and answers, the document is titled "Responses to Some Questions Regarding Certain Aspects of the Doctrine on the Church."

It says although Orthodox churches are true churches, they are defective because they do not recognize the primacy of the Pope.

"It follows that these separated churches and communities, though we believe they suffer from defects, are deprived neither of significance nor importance in the mystery of salvation," it said.

The document adds that Protestant denominations — called Christian Communities born out of the Reformation — are not true churches, but ecclesial communities.

"These ecclesial communities which, specifically because of the absence of the sacramental priesthood … cannot, according to Catholic doctrine, be called 'churches' in the proper sense," it said.

The document is similar to one written in 2000 by the Pope — who was Cardinal Joseph Ratzinger at the time — that sparked an angry reaction from Protestant groups.

"I suspect there will be some reactions that are rather passionate," said Raphaela Schmid, director of the Becket Institute, a group that advocates religious freedom. "I hope they will not be angry because we all try to understand about each other."

The document is issued by Benedict's successor in doctrinal matters, Cardinal William Levada, and endorsed by the Pope, said Reuters.

The decree comes days after liberal Catholic and Jewish groups spoke out against the Pope's move to authorize the wider use of a traditional Latin mass.

The Tridentine mass includes a prayer for the conversion of Jews. Its use was restricted following the Second Vatican Council from 1962 to 1965.

Pope Benedict issued a decree last week authorizing its broader use in an effort to reconcile with followers of an ultratraditional excommunicated bishop.

The Jewish Anti-Defamation League in New York called it a "body blow to Catholic-Jewish relations."