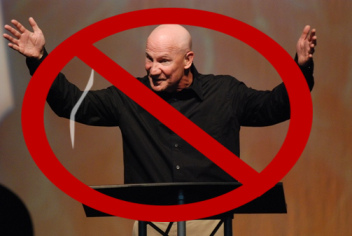 By fair inference, it appears that Mark Dever, Al Mohler and "Ole Lig" Duncan put pressure on Mahaney to step offstage and to take a rear seat. It appears that they--finally--dropped him like a "hot potato."

Louisville pastor C.J. Mahaney — accused in a lawsuit of allegedly covering up sexual abuse by others in the denomination he once led — has withdrawn from the 2014 program of a prominent Louisville pastor’s conference that he founded along with Southern Baptist Theological Seminary President Albert Mohler and two other pastors.

The Together for the Gospel (T4G) conference draws thousands to Louisville every two years, many of them men attracted to the revival of Calvinist doctrines related to the sovereignty of God and the authority of male leaders.

Mahaney said in a July 1 statement that his participation in the upcoming 2014 conference could create “a hindrance to this conference” due to his role in the lawsuit, but he said his withdrawal should not be seen as a reflection on the merits of the case itself.

A link to a statement of support for Mahaney issued by Mohler and the other two T4G founders in May no longer functions, nor does it appears on the T4G home page. The statement was already revised once to correct an inaccurate assertion that the lawsuit only targeted Mahaney because of his ministry work. (Excerpts from that statement are in a previous post.)

In June, the Southern Baptist Convention approved a resolution calling on their leaders to use the “highest sense of discernment” in affiliating with anyone with “questionable” practices or policies on sexual abuse.

Here are excerpts from Mahaney’s statement:


“After much prayer, reflection and counsel I have decided to withdraw from participation in the 2014 Together for the Gospel conference. My reason for doing so is simple: I love these men and this conference and I desire to do all I possibly can to serve the ongoing fruitfulness of T4G.

“Unfortunately, the civil lawsuit filed against Sovereign Grace Ministries, two former SGM churches and pastors (including myself), continues to generate the type of attention that could subject my friends to unfair and unwarranted criticism.

“Though dismissed in May (and now on appeal), the lawsuit could prove a distraction from the purpose of this important conference. My withdrawal is not intended to communicate anything about the merits of the suit. My decision simply reflects the reality that my participation could create a hindrance to this conference and its distinct purpose of serving so many pastors. My strong desire is to make sure this doesn’t happen. I believe the most effective way I can serve my friends who have supported me, and continue to support me, is by not participating in the 2014 conference.”

Plaintiffs have petitioned a Maryland court to reconsider its dismissal of a lawsuit filed on behalf of 11 plaintiffs alleging Sovereign Grace Ministries and its member churches covered up sexual abuse by SGM pastors and members. The court recently ruled that most of the plaintiffs waited too long to sue.
Mahaney was president of the Sovereign Grace Ministries church network for three decades until earlier this year. It moved its offices from Maryland to Louisville last year. Mahaney remains pastor at Sovereign Grace Church of Louisville, which launched last year and meets at an eastern Jefferson County hotel.


Mahaney co-founded T4G with Mohler, Southern Baptist pastor Mark Dever of Washington, D.C., and Presbyterian Church in America pastor Ligon Duncan of Mississippi. Mahaney’s statement did not address what role he might have with the conference beyond 2014.
Posted by Reformation at 11:58 AM