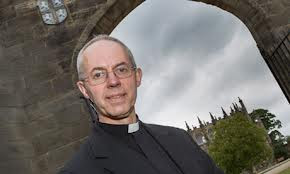 Archbishop of Canterbury: good and God

At first sight, the old-Etonian primate of England's state religion shares little beyond his Christian faith with the Argentinian son of working-class Italian emigrants who now leads the Catholic church. But both the archbishop and Pope Francis inherit organisations struggling with the decline of faith, dwindling congregations and contentious issues of gender and sexuality. Both have to find a way to bridge the gap between the authority of the scriptures that they honour and the lives that ordinary Christians live, and to accommodate the sometimes divergent concerns of Christians in Europe and America and those in Africa and Asia. Neither could possibly be described as either weak or unprincipled, yet each is committed to a reconciliation that many conservatives (and liberals) would reject for the concessions necessarily entailed.

Justin Welby's return-of-post response to Peter Tatchell's "thoughtful" and "powerful" open letter challenging Anglicanism's homophobia, with its swift invitation to a meeting, is a welcome departure. But it is not a sudden conversion to the right to same-sex marriage nor an end to the Anglican rejection of gay priests. This is an archbishop with a background in the evangelical Holy Trinity Brompton movement, Anglicanism's Notting Hill set: good on social action, unflinching in belief and – to its critics – questionable in its methods. Think Nixon in China, not Chamberlain in Munich. But it may work. With a woman archdeacon at his side during his installation, opponents of women bishops can expect to be loved into acquiescence before the key meeting next December; gay campaigners will be less reassured by his conflicted recognition of both the strength of same-sex relationships and a narrow Christian definition of marriage.

In his first sermon, the archbishop left the impression of a cold-shower man rather than a warm-bath one. His is a muscular, unapologetic faith, but he has a long record of going to difficult places to bring people together. And you can disagree profoundly with his argument that it is impossible to live a good life without God, while hoping that his concern for a public ethic and individual morality will be a powerful influence on secular society.
Posted by Reformation at 8:08 PM